On the replay value of Poke-stalkers...

Game: Pokemon Yellow Version
Original context: Pikachu is the protagonist's main pokemon, and follows behind him obediently wherever he goes.
Reappropriation: 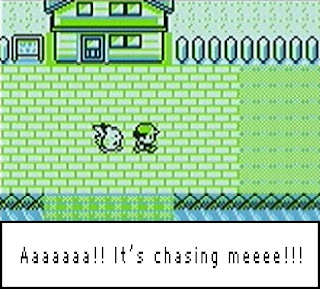 "I met it one day while out walking in the tall grass. It was yellow...with pointy ears that stuck out from the green around it. I don't know why but our eyes met, if only for an instant and in that moment I saw the depths of absolute terror in its beady, black little eyes. This was a monster. I ran like the dickens for my very soul...and have been running ever since..."

The process here was a simple Google image search for an appropriate screenshot, with the subsequent addition of the text and textbox. I think the fact that Pokemon is such a popular franchise and that the game itself looks old-school adds to the fun of reappropriation...I'm in ur Pokemans, messin' with ur childhood!
Posted by mome at 23:10